How to Understand and Interpret Scientific Research Papers 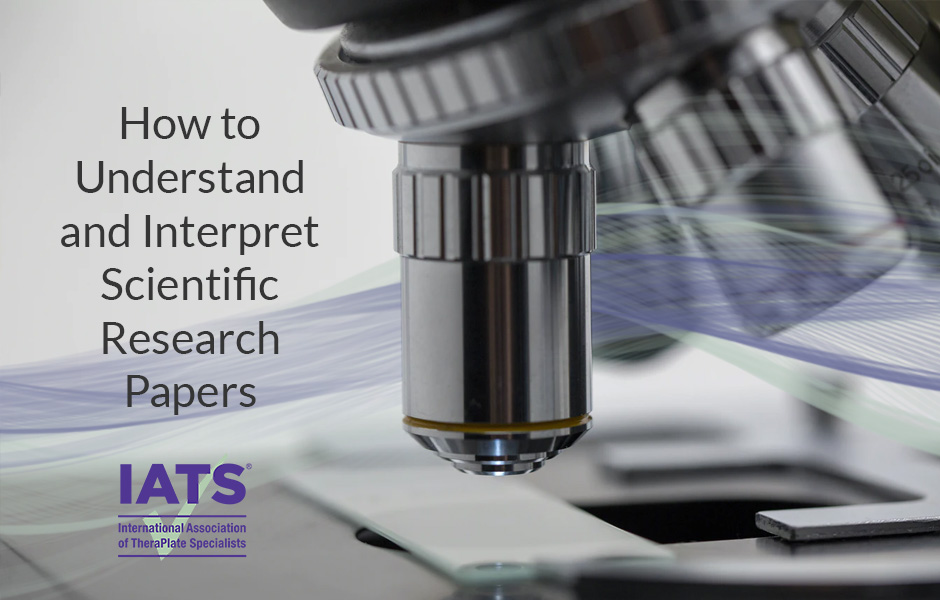 Research and scientific papers can be confusing and difficult to understand, but when you get past the long words and complicated language, they’re much easier and actually not that scary!

No one should feel overwhelmed or unable to understand research, because at the end of the day, that is what helps you make an educated decision on the choices you have available to you.

So, let’s first understand what sections scientific research studies are generally made up of:

So, where do you start?

Here is a quick step by step guide on how to read a scientific paper:

Here we will try to explain a few terms you may come across when reading a scientific paper to help you understand.

Hypothesis – a supposition or proposed explanation made on the basis of limited evidence as a starting point for further investigation.

Null hypothesis – A null hypothesis is a type of hypothesis used in statistics that proposes that there is no difference between certain characteristics of a population. An example would be, ‘the treatment will have no affect on the horse’s flexibility’.

n value – The n value refers to the sample size which is the number of individuals (humans, horses, animals) in the study. The larger the sample size is, the more likely this is to be representative of the larger population.

p value – The p value is a statistical measure that indicates whether or not an effect is statistically significant. In most studies, a p value of more than 0.05 means the hypothesis is true. The smaller the p value, the greater statistical incompatibility of the data with the null hypothesis.

Bias – cause to feel or show inclination or prejudice for or against someone or something. This could cause data and results to be skewed and the study to be inaccurate.

Controlled Experiment – an experiment with two or more randomly selected groups, in which the researcher controls or introduces an independent variable and measures the dependent variable before and after. An example of this could be an experimental group and control group, one has received the real treatment and the other might not receive any or may receive a placebo treatment.

Blind Study – in a blind study the participants do not know what they’re being assessed for or any details about the study. An example could be that there are two sample groups, one given a real treatment and the other given a placebo and the participants don’t know which group they’re in.

Double Blind Study – similar to a blind study, but in this the participants and the experimenters both don’t know which groups are which or the details of the study. This helps to reduce bias.

Placebo – a medicine or procedure prescribed for the psychological benefit to the patient rather than for any physiological effect.

Variable – A variable is any factor or condition that can exist in differing amounts or types. An experiment usually has three kinds of variables: independent, dependent, and controlled.

Independent Variable – The independent variable is the one that is changed by the scientist.

Dependant Variable – The dependant variable is the variable that depends on other factors that are being measured.

Controlled Variable – The controlled variable is something that the scientist has chosen to purposely keep the same or constant throughout the experiment.

This is all of course, just a starting point to understanding research and scientific papers. You will gain a better understanding the more papers you read, as you will pick up on similarities with them and common trends. By reading what other well known and respected scientists in the field’s views are on them you will gauge what is a ‘good’ study and what is a ‘bad’ study.

The most important thing to remember, however, is that the study can only test for the variables that they have set out in the experiment, and it only really tests the participants within the study. Conclusions are made by the researchers based on the information they can found from the sample of participants in that study. This cannot be 100% accurate of an entire population and is only as reliable as their methods of research, the data collected and how it has been analysed. Many people forget this and make assumptions based on what they have read and come to conclusions that are not supported by the data in the study.

You can only say for sure that the study affected the participants within it in a certain way based on the data. You cannot state that this will be the same for the rest of the population, or other populations that haven’t been tested. This is why it is vitally important to assess the study, it’s reliability and its validity, before making assumptions or quoting it to ‘prove’ something.

We hope this has helped you to gain a better understanding of scientific papers and lessen the fear of tackling them, but if you have any other questions or would like more information on becoming an IATS qualified TheraPlate Specialist please do get in touch with us.