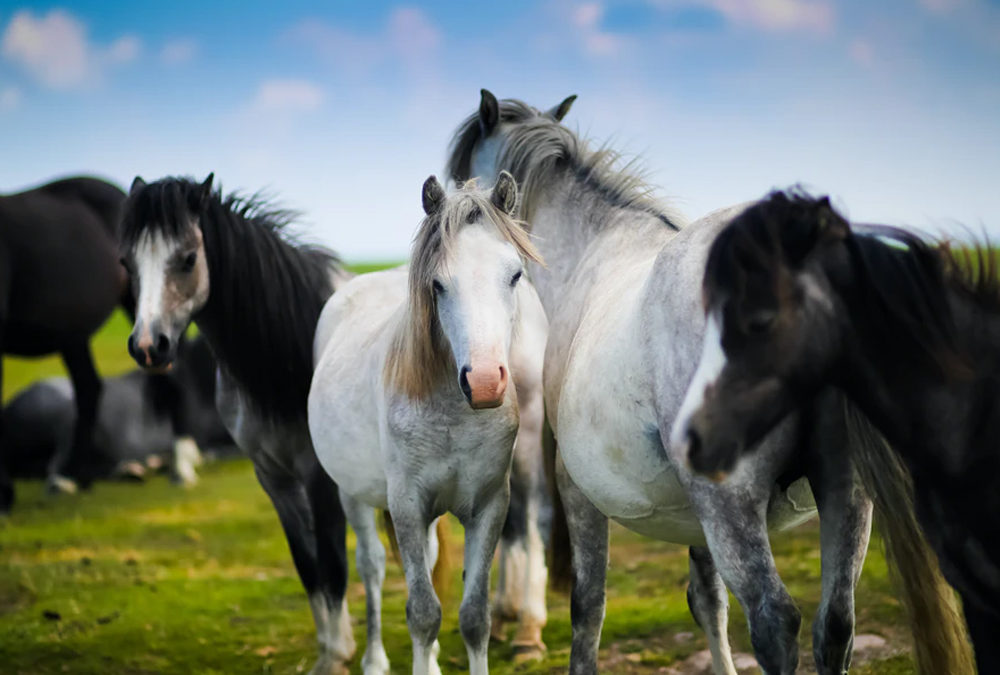 The dreaded ‘L word’ always springs up at this time of year, with the warm and wet weather meaning our paddocks are overflowing with lush grass. Any owner of a Native pony or cob will always be on the lookout for it, but do you know the signs to look out for and ways you can prevent this awful condition taking hold? Let’s recap together…

First of all, let’s remind ourselves what laminitis actually is. Laminitis is a condition that affects the laminae which is the connective tissue between the pedal bone with the hoof wall. When this connection becomes compromised the pedal bone can rotate and in extreme cases penetrate the sole of the hoof. These changes are irreversible, so prevention of this is definitely better than trying to treat.

While most horse owners will be familiar with the most common causes of laminitis there are other factors that are not so common that are known to cause it too.

Diseases with inflammation is the one that most of us will be aware of and see most often. While the actual triggers remain elusive for this type of laminitis, the causes are activation of inflammation throughout the body resulting in inflammation of the laminae. This inflammation is what compromises the connection between the pedal bone and hoof wall.

Insulin plays a role in the hormonal diseases in relation to laminitis, which is where conditions such as Equine Cushing’s disease and Equine Metabolic Syndrome can cause laminitis. These are sometime harder to spot initially but can be diagnosed with a blood test from your vet.

Mechanical overload can come from an injury such as fracture or infected joint that means the horse overloads the weight bearing opposite limb, potentially reducing the blood flow in the hoof and resulting in laminitis.

What are the signs?

So, now we’ve recapped what laminitis is and some possible causes, let’s look at the signs to look out for.

Lameness in two or more limbs is a common sign of laminitis. The horse will likely present foot sore and tender, particularly on a tight circle or turn. Reluctance to move or walk on rough or hard surfaces is also common.

Sticking with the limbs, the horse or pony will likely have a strong digital pulse. This can be found in the fetlock and pastern area by placing forefingers over the artery.

Pain in the toe, where the pedal bone is potentially pushing on the sole, will cause a horse or pony to rock back on their heels. This stance is strongly associated with laminitis and is a classic sign to watch for. It might not be an early sign though, so shouldn’t be relied on.

If in doubt, speak to your farrier or vet who will be able to use some hoof testers and identify sensitive areas on the sole. Pain, particularly in the frog area, can be indicative of laminitis.

As with any health condition, if you are unsure or your horse appears to be in pain, please seek veterinary advice. Your vet will be able to advise on specific diagnosis and treatment for your individual horse or pony, and your circumstances.

A vet will usually diagnose laminitis based on symptoms and signs, but x-rays will also be used to determine if there has been any rotation of the pedal bone and the degree of damage internally. As mentioned before, blood tests can be used to test for hormonal imbalances too.

Management of a Horse or Pony with Laminitis

As we’ve mentioned before, prevention is better than cure so here are a few things you can do to manage a horse or pony that could be prone to laminitis or has show signs in the past.

Regularly condition scoring your horse or pony to keep an eye on their weight will help reduce their risk of laminitis. While it doesn’t remove the risk completely, overweight horses and ponies are more prone, so stopping them becoming overweight will help. Increased exercise and reduced calorie intake are good ways to reduce your horse’s weight if they are on the larger side, but the challenge is making sure they still have access to roughage in their diet, so not starvation.

Horses should be fed little and often, so low-calorie feeds and soaking hay to reduce the carbohydrates will help provide them with the fibre they need but not overdo their waistlines. Reducing access to lush grazing will also help manage weight too, especially in times where the grass is growing a lot in spring and autumn.

Being quick to act

Your vet and farrier will be able to advise on the best course of action to reduce future chances and manage your horse or pony day to day.

Many people have used the TheraPlate as part of managing horses and ponies with laminitis and reported great results. Including an multi time World Champion Appaloosa mare in America who went lame due to laminitis and significantly reduced blood flow of the main artery in the front coffin bone.

The mare spent most of 2012 on box rest and received 2 months of extensive therapy treatments with no noticeable improvement, at which time the vet’s advice was to retire her. With hope dwindling, her owner decided to try using the TheraPlate to improve her prospects. After twice daily sessions of 20 minutes each with the Laminitis Protocol on the TheraPlate for 45 days, the difference was clear on the before and after x-rays that you can see below. 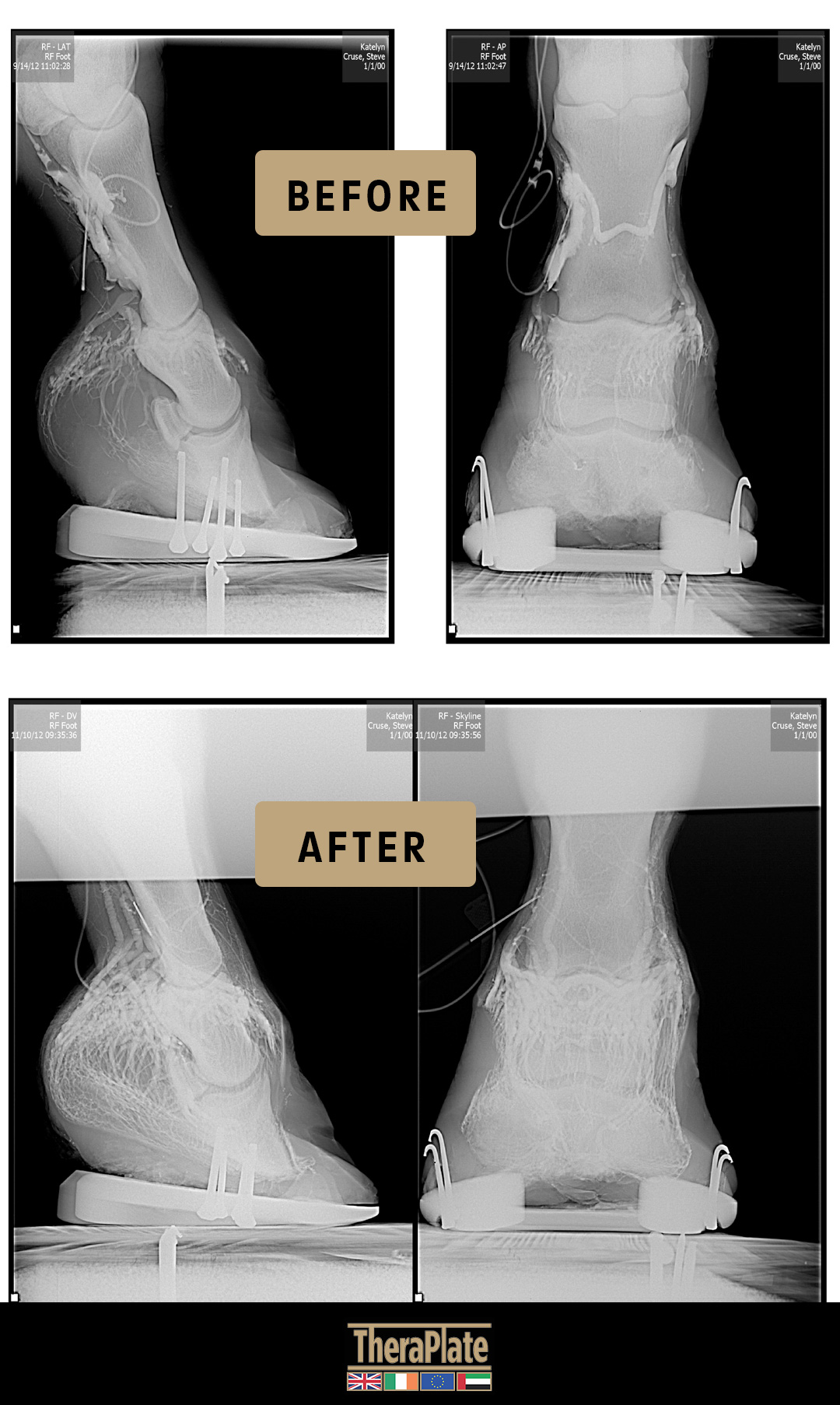 Laminitis is a crippling condition that every horse and pony owner fears, but knowing the signs and the course of action to take should you spot them, can really make all the difference. If you are in any doubt, however, please get in touch with your vet or farrier to assist and guide you to take the very best care of your animal.